I was flipping through Grimey’s Blues section while standing next to a young nursing student named Grant.

At Grant’s every third flip, I’d say, “Oh you need that one, too. And that one’s great! This shit is amazing! Sorry, don’t shop records around me. I’m a bad influence.”

“Clearly,” Grant replied. “Right now, I’m taking stock of my fridge in my head, deciding whether I can afford groceries or music.” Opening my arms to the bins stocked with vinyl, I said, “But this will feed your soul.”

We both laughed and I made my way to the register with Screamin’ Jay Hawkins, Howlin’ Wolf, Albert King and Brandi Carlile tucked under my arm.

Then Grant’s same concern washed over me as the cashier rang up my tab — $108 and some change. 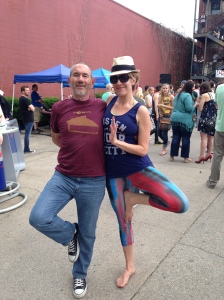 The day started with free yoga led by Dylan Sanders at Jackalope Brewery. I practiced toward the back with the open garage door revealing a sunny Nashville skyline. A sparrow snacked on malt scattered around a forklift as I took in Music City upside down through downward dog legs. After class, Dylan and fellow yogi John Bull were rubber banding used mats for the Germantown rescue Crossroads Pets. I overheard John discussing his bus route to the shelter.

I asked, “Do y’all need help with that?”

I offered, “How about a ride?”

“That would be great,” he said. “The shelter is only three miles away.” On the way, John told me Crossroads Pets is a non-profit Emmylou Harris opened. He gave me a quick tour and introduced me to the staff. Some were young parolees tending to puppies in back. The man in the laundry room had a fantastic handshake.

John offered lunch at Golden Coast on West End and 18th for the lift. As of right now, it’s one of the few places on West End that hasn’t changed since I first moved to town in 2007. Red Chinese lanterns lining the storefront dangled in the breeze. John said, “This place has the best dumplings in town. It’s a poor man’s dim sum!”

The place was packed with folks who predominantly spoke English as a second language. I filled my plate with five-spiced eggplant, fried rice, green beans and dim sum from the buffet. I listened to John’s Nashville story. He told me about his work with Centennial Dog Park and we chatted about our mutual yogi friends. I sipped hot tea as John told me of his contract work with the U.S. military in the South Pacific during the Vietnam War. He didn’t go into much detail. He mentioned that he was a practicing vegan, and that he was happy in health with yoga being his only form of exercise. He built a 20×14 cabin in the woods in East Tennessee with the help of some ex-military members. He gave up driving a year ago. I listened intently, amazed by his huge heart. He truly lives to serve his community.

Our fortune cookies were perfect, too. Mine read, “You will soon be blessed with the wisdom of the ages.” His read, “Now is the time to make new friends.”

I shared my Nashville story and chatted about my work in music. I told him my plans for Record Store Day and invited him to shop with me at Grimey’s. John had never experienced Grimey’s on Record Store Day and he noticed my eyes light up at the thought of the purchases I’d planned to make.

Grimey’s was packed with folks digging through crates and shelves stacked with music. Tables outside offered pre-loved records for $1 or 25 for $20. Halestorm was setting up for a 30-minute set. People lined the railings along the three-story staircase, craning their necks to get a glimpse of Lzzy Hale sweating and wailing like a banshee in a black leather jacket under a blazing sun. I watched until I couldn’t take the heat and retreated into the darkness of the Basement. 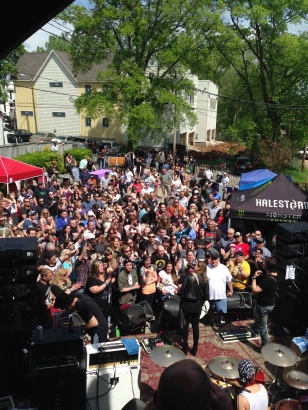 I felt like a vampire ordering two Miller High Lifes when I heard, “Lauren!” I turned and found Charlie Pate, Aaron Raitiere and Jon Decious seated at a table.

Charlie is among the best country vocalists in Nashville. He sings background vocals on Lee Ann Womack‘s Grammy-nominated album The Way I’m Livin’. With Aaron, Charlie co-wrote one of my favorite country love ballads of all time, “Baby.” Aaron is another talented songwriter who is a regular at Neighbors’ Tuesday night writers’ night. Jon is one-half of the new duo Devious Angels and his resume includes a spell with Nashville rockers The Pink Spiders, whom I supported on MTV’s TRL when Carson Daly hosted video countdown.

They all just happened to be roommates with my new blue-eyed soul obsession, Anderson East. I lit up over the chance to day drink with most of the songwriters behind Anderson’s upcoming debut, Delilah. Aaron and Charlie had a hand in co-writing the super sweet “Only You” and the lead single “Satisfy Me.” Jon co-wrote the tender “What a Woman Wants to Hear.”

“I love that song,” I said. “If you don’t mind me asking, was that track inspired by personal experience? I feel like I’m right there with that couple when I listen to it.”

“Not at all,” Jon said. “Anderson didn’t have very many songs that made women want to go crazy. When he went to FAME with Dave Cobb, they found all this controversial soul. There was a song titled, ‘Don’t Tell Me I Can’t Hit My Baby.’ I told Anderson, ‘You’re going to have a hard time singing songs like that to a female audience. You’ve got to give a woman what she wants to hear. In fact, that’s the song we’re writing today.'” I thanked him for the point of view because there aren’t many songs on the radio right now that gives women what they really what to hear.

I listened to Aaron and Jon exchange war stories from touring the country with independent musicians. Aaron weathered Snowmageddon 2015 with Anderson on the Northeast leg of Sturgill’s Simpson‘s tour. “We were driving on ice at least six-inches deep.” Aaron said, measuring a visual with his hands. “We passed walls of snow standing 20 feet tall on the interstate. We prayed for our lives on that drive but we had to make it to Boston. It was sold out. I sell t-shirts for most of the run because he trusts me.”

“The routing for his tour is crazy,” I said. “Folks don’t understand how much of independent touring is a Griswold family vacation on crack. You have to know your people and get along. I’ll never forget my weekend on the road with Brent Cobb. He played a club in Americus, Georgia that was apparently run by a guy who was wanted in another county for violent crime.” I failed to mention the owner’s oversized three-legged mastiff also tried to eat me for lunch and asbestos snowed into everyone’s Solo sups once Brent started. I ended up sleeping off the show in the van parked outside. I couldn’t wait to get back home.

“That’s why I respect new artists,” I said. “They go through so many evolutions even before I get the chance to interview them as an ‘up-and-coming’ act.”

“Someone wanted to kill me in Pittsburgh,” Jon offered. “I was on tour with The Pink Spiders and I got a text from someone warning me he was going to kill me on the road in Pittsburgh. He said, ‘I know your schedule online!’ We had to hire a private investigator we couldn’t afford. It obviously didn’t happen.”

Aaron asked, “Did you mess around with the wrong woman?”

“Possibly,” Jon said. “Those were in my younger, wilder days. I’ve had a couple close calls.”

My girlfriend Lexi and yogi John found us for Jon Spencer Blues Explosion — a band I have wanted to see since high school, and they did not disappoint. The set was a magnetic force of blues and punk. Aaron and I snaked our way to the front to watch Jon eat his microphone and wave his hands around a Theremin like a sorcerer. I ate it up.

After the show, I helped Lexi pick out 25 LPs for $20. I grabbed some Merle Haggard and Madonna and spotted my good friend Wess Floyd, who is about to welcome his first son with his beautiful wife Melissa. His name will be Augustus Wesley, and he will love everything Auburn and have an incredible ear for rock, soul and blues. The new music Wess is working on sounds excitingly trippy. He explained, “I’m shooting for an album that’s like if Warren Zevon and Jackson Browne made a shoe-gaze album for STAX in Memphis.” I have no doubt Wess will succeed. He is among the most loyal music fans I know.

As we made our way to the register, I picked up some self-titled Betty Davis, Big Star‘s Radio City and The New Basement Tapes. I said my goodbyes to Lexi, drove yogi John home and arrived at my place, worn out and soul fed with new pearls to add to my prize record collection. It’s a blessing to know the hardest decision I had to make that day was, “What do I listen to first?”

iThere are no comments

Begin typing your search above and press return to search. Press Esc to cancel.